This post contains affiliate links. Purchasing something through the link may give us a small commission or credit at no extra charge to you. This helps us maintain our website! Thanks for your support! Visit our disclosures, TOS, and policies page.

When Cancer Interrupts your Life 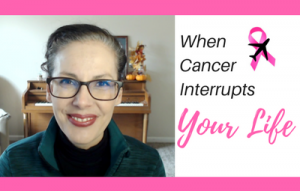 Obstacles are just challenges waiting to be conquered! -Anna

I was a little over 2 weeks away from starting my flight attendant training with my dream airline. I was anxious, excited, and ready to go. Until I got the phone call that changed my life, “You have cancer.”

That cannot be right. I spent the last few months going through a rigorous application and interviewing process. I was one of the few that got invited to be a part of an amazing company. Why did this happen now? I’ve been home with my kids for the last 15 years. Why didn’t it show up sooner?!?

Not because I had cancer, but because of the fact that my plans were altered in the span of a few minutes. I went to work, researching my options. I chose to do a simple lumpectomy a week later. That would give me 10 days to recover so I could attend training. I knew I could do it.

The surgery was scheduled and went off without a hitch.

I recovered pretty well. Emotionally, I struggled with the result of having your breast altered, but I would make it to training! I was a bit panicked with trying to set everything up in preparation for my absence. I was a bit concerned about the pain I was having, but I was going to need to push through it. More than once, I worried if this huge life-altering obstacle would interfere with the rigorousness of training. I didn’t want to flunk out of training because of cancer.

My husband took me shopping for my “training uniforms” four days before my departure. I started packing. The following day, I had a follow-up appointment. It should be pretty easy, I was going to get the results of the biopsies. We found it really early so surely we got everything.

The best news ever!

I walked into my appointment not thinking twice about why I was there. It was a follow-up, that’s all. The doctor came in and said that there was no cancer in the nodes. Honestly, I did not really know what that meant or why my husband, who is a nurse, was ecstatic about it. Afterwards, I found out that if the cancer is not in the nodes, that means it did not have the opportunity to spread.

The worst news ever!

Then dropped the other shoe. “The margins were not clear, I’m going to have to go in again and get more out.” When margins are not clear that means there is still cancer in my body. My doctor asked me when training started and I told him that I’m going to postpone and get rid of this cancer first.  My next surgery would be the following Thursday. I was sad, but a bit relieved. The stress of trying to deal with cancer treatment and a mentally/physically difficult training program was almost too much.

I went home an contacted the company to tell them what it up. I delayed my training and figured, I should be good to go by February. If you ever try to plan anything when it comes to cancer. Do yourself a favor and don’t.

What happened next was more interruption to my life. The decision I was not expecting to make.